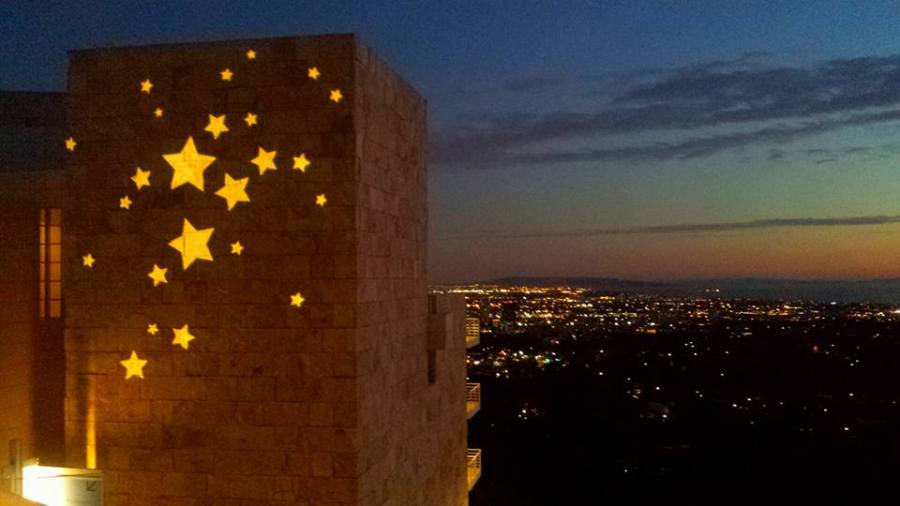 REI told the world (or at least Americans) that they would be closing their stores the day after Thanksgiving and that people should #optoutside instead of shopping. According to my Facebook feed, we needed this reminder and we listened. Perhaps the 405, the 101, the 5, et cetera deter us from going anywhere past our own little neighborhood bubble. But, people! There is so much to see in Los Angeles for little to no cost! This past Thanksgiving weekend, I stayed local and rekindled my love for L.A.

Did you know that there is a bike trail that goes from North Hollywood to Chatsworth? The Orange Line Bike Trail is right next to the Orange Line Busway, which runs from–you guessed it– North Hollywood to Chatsworth. The total length of the trail is 18 miles.
Due to Thanksgiving duties (reheating the Gelson’s dinner, football games on t.v.), I only biked nine miles roundtrip, from Woodley Lakes Golf Course in Balboa Park to the Sherman Way Bus Stop. I was going to ride just a little bit further but it looked like it was about to rain. Most of the westbound trail from Balboa Park is on Oxnard and Topham Streets, which are located in residential neighborhoods. But once you get to Canoga Avenue in Woodland Hills, go south a couple of blocks and you will hit a major shopping area.

Regardless of where you start on the trail, exploring Balboa Park should be on your agenda. One of the many reasons that people should not have any hate for the 818 is Balboa Park. Personally, I think Balboa Park is better than Griffith Park. Balboa Park has three golf courses, many running trails, the L.A. River (with water), a lake, many playgrounds, a baseball field for special needs sports programs, a shallow stream where the little ones could splash around, and even surreys for rent. And that’s only the central part of the park. Across Balboa Avenue, the west side of the park, there are numerous soccer and baseball fields and even a velodrome. The velodrome is one of the only three in Southern California. If you head south on Balboa to Burbank and go east, you will find the Hjelte Sports Center on the south side of the street. Keep going east and then head north when you get to Woodley.  Along Woodley, you will see signs for the toy helicopter/airplane field (Bruce/Caitlin Jenner used to come here), a  Japanese Garden (where you will see the Tillman Water Reclamation Plant, which was a Star Trek filming location), cross country trails, cricket fields, and even an archery range. And of course, lots of picnic tables everywhere.

If you decide to check out the Orange Line Trail, plan an hour or two for Balboa Park.

You are welcome. This is an L.A. City Park tucked in the northwestern part of the City. I hiked this with a bunch of friends and some of us (me) huffed and puffed while others were able to quickly make it to the halfway point of the trail. Due to the cold wind, we turned around at the 1.5-ish mark. 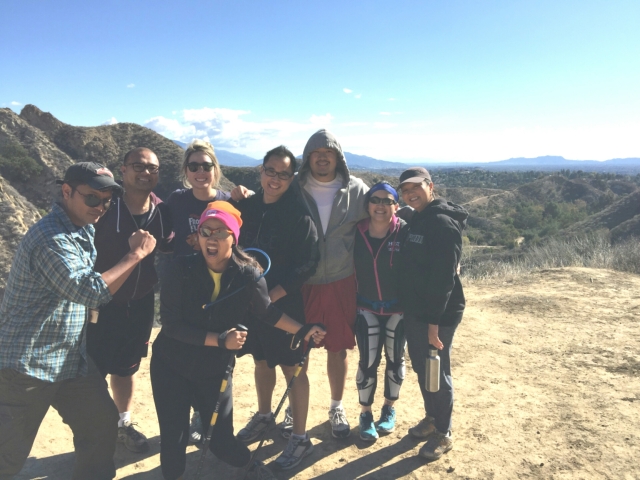 I actually hiked this trail a couple of months ago. The very last part of the trail was steep and narrow.  The end of the trail was marked by a large stone at the very top. Were it not for the skunk that I saw in the bushes between me and the stone market, I could have crossed O’Melveny on my list of completed trails. Grrr! But this mini outdoor adventure did not just end with the skunk. Because instead of taking the same trail back down, I decided to take a different trail. The trail looked like it had nice zigzags with a view; I thought it would be more pleasant and scenic. However, after the first switchback, I quickly learned that taking this trail was not a good idea. The trail down was steeper than it looked and had loose dirt. I had to go down the trail sideways because it was slippery. I finally spotted the park but my happiness was short-lived as another steep hill with loose dirt separated me from the flatter parts of the trail. The hill was almost a vertical. Thank goodness for fellow hikers who placed a rope that others could hold onto. Otherwise, the only way I could have gone down that hill was on my behind. But when I finally made it down the hill, I spotted a mountain lion or a coyote from less than 50 yard away! I was by myself (note: NEVER a good idea) and didn’t know what to do. I froze and remained still. Thank goodness that I had cell reception up there and was able to Google what to do. This adventure was more than I bargained for.

Morals of the story:

Those are the reasons why my friend and I rallied a group. And after our hiking excursion, we feasted on everyone’s Thanksgiving leftovers. We ended the fun day by going to Wanderlust Creamery for some super delicious ice cream. I highly recommend lavender honey on ube cone.

The most difficult part of exercising for me is getting up when my alarm goes off. Like a toddler, sometimes I even exclaim in a loud, angry voice, “Ohmigod it’s so so early! Why? Why???” on the first alarm beep, as if it was someone else’s fault that it went off. Since it’s been hard to motivate myself lately, the only way I could get up to work out in the morning is to be accountable to other people. I pride myself on not being a flake. So, although I had to drive down from The Valley on that cold, Saturday morning, I was at the park by 8:00 a.m.  to meet my friends.  My friends and I joined Kate, from Happy Hour Body, who led the group in dynamic stretches and other warm ups.  After the super legit warm up (we did sit-ups and squats! whuuut!), we headed across the street to Ballona Creek Trail for a short run. The pace and distance varied based on ability.  Each of us had a running buddy. 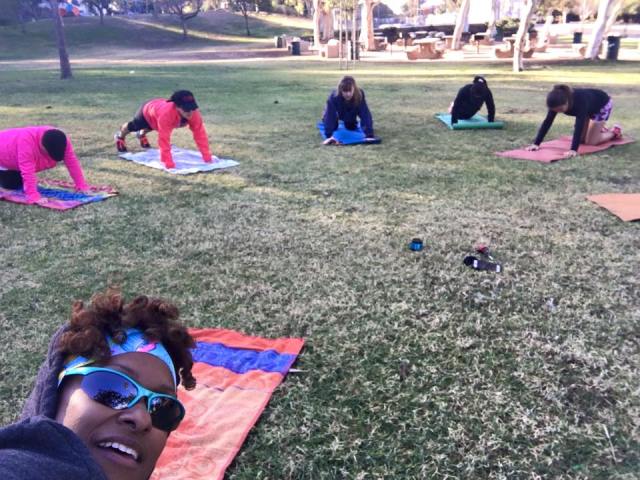 The Ballona Creek Trail starts near Jefferson Boulevard near La Cienega and ends at the beach. Some people think that the area between Sepulveda to Lincoln can be shady. I think it’s fine; my friends agree with the other people, though. In general, it’s always better to not go alone. Plus, it’s more fun. Anyway, once you get to the end of the Ballona Creek Trail, the trail becomes the Marvin Braude Trail. Take the Marvin Braude Trail north to Marina Del Rey, Venice, and Santa Monica or south towards Playa Del Rey, Manhattan Beach, Hermosa, and Redondo. 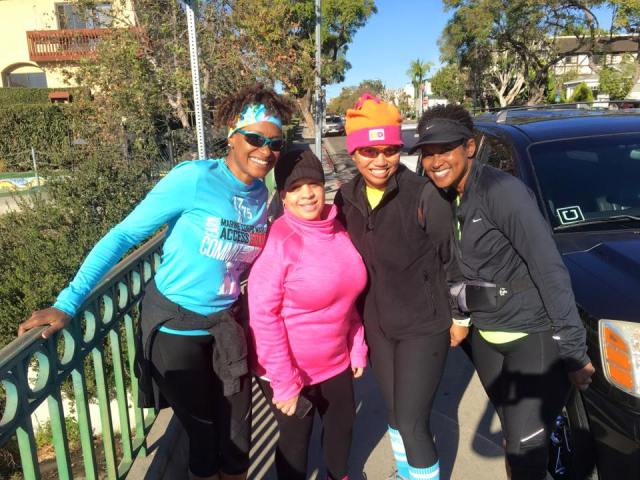 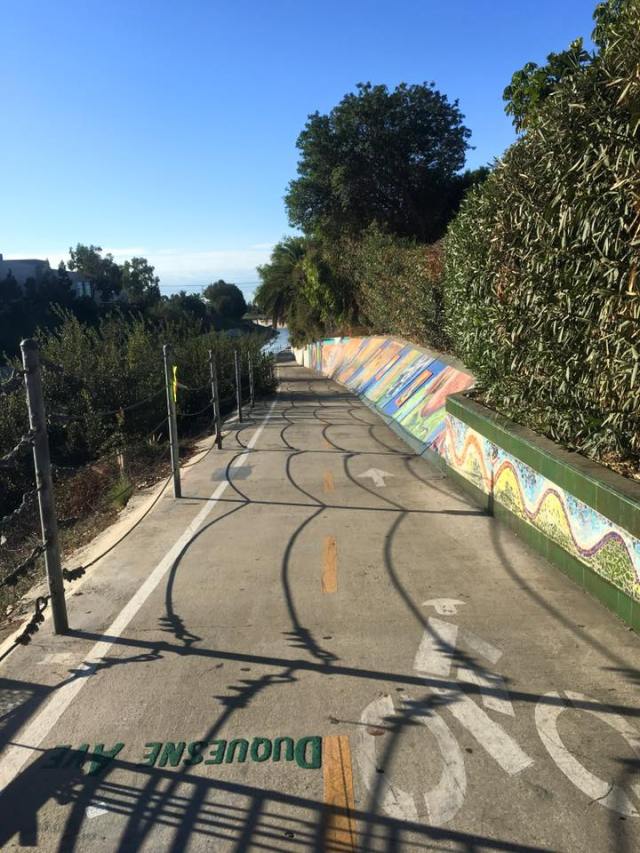 Along the Route and Useful Info Along Trail:

Once upon a time five years ago, Jefferson Boulevard was just a short cut from Sepulveda to La Cienega. Now it’s the pretty much the eastern end of Silicon Beach. You’ll likely spot hipsters and creative types.

Exit Duquesne and head north to Downtown Culver City for coffee, brunch, bars, food, ice cream, etc. If you head south on Duquesne, you will see Culver City Park is just across the street. If you go east on Jefferson about half a mile, Baldwin Hills Overlook/Baldwin Hills Stairs/the New Stairs Because the Santa Monica Stairs is Now Passe will be on the south side of the street. There are a few bike racks at the bottom. Very few. The top has great view of L.A. and the Hollywood Sign on a clear day. The small amphitheater, garden area, and the visitor area are all worth the hike up. if you want to skip the trail and the stairs, you can also walk up Hetzler Road.

Exit Sepulveda: If you need a bathroom stop, there is a McDonald’s on the west side of the street.

Exit McConnell: There is Beverage Warehouse. It’s open to the public. Great selection. Also, if you want to grab a bite, take this exit and head past Culver Boulevard to Bonaparte and then head west on Bonaparte. Bonaparte turns into Glencoe (Glen Alla Park on the corner). Keep heading west for a couple of long blocks and you’ll see a shopping area with a lot of quick bite and dining options.

Saturday PM, Date Night/Just Another Night Out With The Boyfriend
The Getty Center

The Getty Center will be open until 9:00 p.m.on Saturdays until January 2nd. If you get there after 4:00 p.m., parking is $10, instead of the usual $15 per car. If there is long line to get on the tram, hike up! It’s about three-quarters of a mile. I hiked up wearing 2-inch boots and was fine.

The S.O. (Significant Other/Boyfriend) and I took advantage of the slightly quieter vibe. Most of the people who were there also seemed to be on dates. Who could blame them/us? It was such a clear day that we could clearly see the Pacific Ocean as soon as we arrived. We also arrived just in time to watch the sunset. Because it was not crowded, there were a lot of quiet spaces where we just chilled and drank our adult bevs before we checked out the exhibits. My favorite area: West Building, Lower Level: Sculptures. 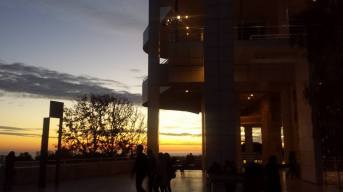 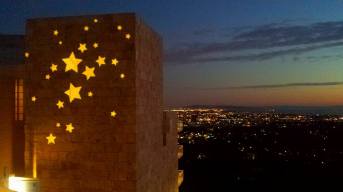 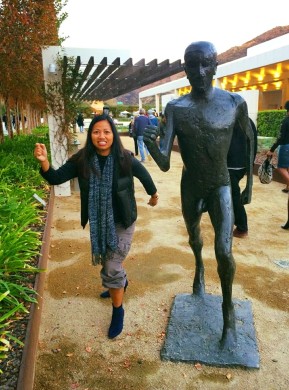 Don’t wait for REI to remind you again. Keep exploring L.A. one area code at a time!