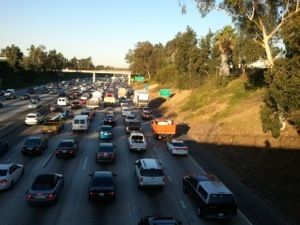 My job requires visiting different sites throughout Southern California. In addition, I have to attend a lot of events in the evenings. The freeways are interwoven in my existence.  Although I have accepted L.A. traffic as a way of life and the bargain most of us made with the devil for the 70-degree weather in February, it still stresses me out. So, while Giuseppe, my car, is at my favorite mechanic for a week for a little face lift, I thought I give public transportation a try. I wanted respite from driving and traffic.

Fortunately, I live near one of the main L.A. thoroughfares and work near another one. It should take me two buses each way to get to and from work. But, I get distracted.

Instead of getting off where I needed to transfer to take Bus #2, I decided to get off half a mile before my stop, right in front of my favorite donut shop. The donut shop wasn’t too far from work but it was not a short walk either. I had plenty of time so I decided that instead of catching Bus #2, I would get a donut and walk to the office. Along the way, I crossed one of the streets that overlooked the freeway. It’s one thing to sit in traffic, but it’s another to see how far it extends. Or not see.

I kept walking and said ‘hello’ to a few people I passed by– the man walking his dog, the film crew setting up outside a house, and some random guy just leaning next to a door without a sign, smoking. I must admit that I had a Law & Order/Criminals Minds moment but I assured myself that, well, should anything happen, I’m on a fairly busy street with witnesses.

The good thing about where I worked and where I lived was that there were various bus options. I decided to take a different bus on my way back. I got off at the last stop and was planning to transfer to another bus that would drop me right on my block. But as soon as I stepped out of the bus, the temperature was just too perfect.  It would be wrong not to walk home.

The walk home was at least twice the distance of my morning walk. But I figured that it would allow me to knock down some cardio time.  And since I was walking along the bus route, should I get tired or lazy, I could just hop on a bus. But I kept walking.

I had a nice steady pace going until I got to Downtown Culver City. Then I saw people. And the farmers’ market. And then a clown. Then I smelled the scent of carne asada mixed in with the fragrance of fresh lilies and the sweet smell of kettle corn. I had to participate in this Tuesday fun! I rushed passed the local businesses, went to the ATM for some cash, and bought a carne asada sandwich, hummus, pita bread, fried pita chips, and a bunch of lilies.

Shortly thereafter, the sun started setting quickly. It was really time for me to head home.